Many of us cannot recall exactly what we were doing in the heat of a Georgia summer in 1992.  Four Gwinnett high school students were asked to revisit that summer in the context of a true crime story that occurred 25 years ago in July and August of 1992.

The book, still available in Gwinnett’s libraries and through Mercer University Press, sets out in detail the allegations and investigation that swirled around the missing child.  The Gwinnett County Police Department handled the criminal investigation and mustered immense police and volunteer resources to attempt to locate the child and solve the criminal case that followed.

These four students, Michael Woods, Angelic Showalter, Jay Byrd, and Jazlyn Jackson, were further treated to a luncheon with the author, Jackie White; District Attorney Danny Porter, who prosecuted the case; and Superior Court Judge Ronnie Batchelor, who, prior to his election as judge, served as defense counsel for the man accused in the crime.  The lunch provided a rare opportunity for the students to obtain an inside view into the progression of a murder investigation and criminal prosecution.  Students were allowed to ask numerous questions of all three participants and heard the three guests recall fascinating details of the case.  Some time was also spent discussing locations in the county where events unfolded and the changes in those locations brought about by time and development.

At the conclusion of the lunch, White signed copies of the book for each student and talked briefly about her plans for her next book, a work of fiction. 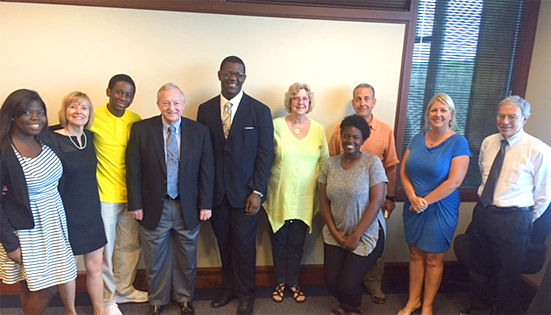