Community involvement is driven by a combination of outreach and facilitation goals. Key community involvement activities in the preparation of the Unified Development Ordinance included the UDO Advisory Committee, Leadership Teams and public meetings, among other outreach tools. 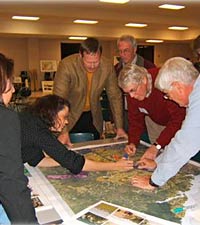 Meetings were scheduled to coincide with project deliverables and milestones. Numerous meetings were held, with the first being held on February 3, 2011.

Public Hearings
Public hearings were held before both the Planning Commission and Board of Commissioners, resulting in adoption of the UDO in February 2014.