The investigation ultimately lead to information identifying Wonnawon Wonzon (age 29) as the Atlanta leader of the “59 Brims” and other members of the gang’s leadership.  Marlin Smith (a.k.a “Bandana” – age 34), was identified through evidence and self-admission as the leader of the “59 Brims” in North Carolina and Virginia.  Smith was arrested as a result of this investigation.

In July of 2019, the Gang Task Force identified, Wonnawon Wonzon and four others as main targets of this investigation, Sceon Skeffers (age 29), Robert Lo (age 28), Anthony Savage (age 23), and Devery Dees (age 24).  All five of the main targets are validated “59 Brim” Blood criminal street gang members.  The investigation led to the identification and/or arrest of several other gang members, the seizure of 72.4 grams of fentanyl, 139 grams of heroin, 57.6 grams of cocaine, 44.6 grams of MDMA, 2,447 grams of meth, and the recovery of 18 firearms (4 stolen). 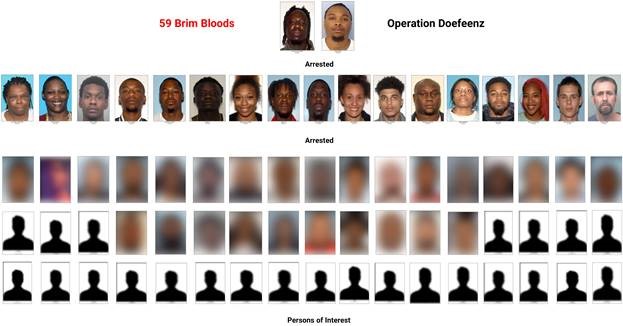