The Gwinnett County Police Department responded to the jewelry store around 8:00 P.M. and met with an employee, Aslam Lakhani (age 59, Duluth).  Lakhani told officers that two men entered the store shortly after 7:00 P.M. and requested to see gold chains.  Lakhani allowed both of the men to try on a gold chain.  After each one of them put on a chain, they ran from the store without paying for them.

Lakhani was able to provide officers with video surveillance of the incident.  The surveillance showed that one of the suspects was a white male who was wearing a red sweatshirt with the word “Vans” on the front.  The male was also wearing gray pants with black and white shoes.  That male stole a 27 inch rope chain.  The other male was a black male wearing a white Puma sweatshirt with gray sweatpants, white shoes, and a blue colored baseball cap.  That male stole a 20 inch chain with a charm that had the letters “CZ” in the center.

The Gwinnett County Police Department’s Robbery Unit is actively investigating this case.  Detectives are asking for the public’s help in identifying these two suspects.

If anyone has any information to share in this case, please contact GCPD detectives at 770-513-5300.  To remain anonymous, tipsters should contact Crime Stoppers at 404-577-TIPS (8477) or visit www.stopcrimeATL.com.  Crime Stoppers tipsters can receive a cash reward for information leading to an arrest and indictment in this case.  Case Number:  19-101368 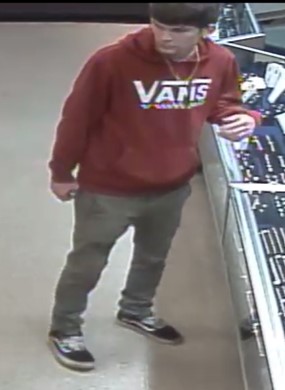 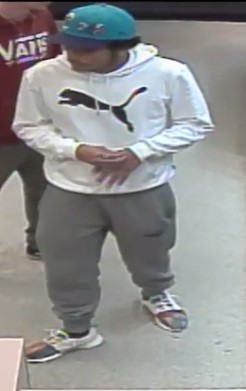