(Buford, Ga., February 2, 2021) – The Gwinnett County Police Department arrested Lamont Dickerson on February 1st, after he attempted to carjack two vehicles and broke into a home in Buford.  Just before 5:00 AM, officers responded to the area of South Puckett Road near Ridge Road in reference to the first carjacking attempt.

Officers learned that the victim was sitting in his car when he was approached by Dickerson, who opened the victim’s car door and ordered him to get out.  The victim accelerated away from Dickerson, who then attempted to carjack a second vehicle near Ridge Road and Hamilton Mill Road.  In that attempt, Dickerson got into the female victim’s car through the passenger door and ordered the female to get out.  When she refused, Dickerson ran off before police arrived.

As officers were searching for Dickerson, he used a brick to break a window and gain entry into a home on Woodtree Lane.  When he entered the home, he was confronted by an armed homeowner.  Dickerson fled from the homeowner and led police on a foot chase before being arrested.  The case was taken over by detectives, who are investigating the motive for Dickerson’s crime spree. 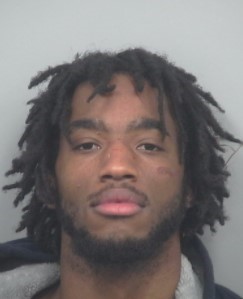