Update #2: The Gwinnett County Police Department has arrested James Robertson Jr. (17 year old male from Snellville) in relation to this homicide.  Robertson has been charged with Aggravated Assault and Felony Murder.  Detectives are continuing to investigate this homicide.  At this time, it is believed that the victim was familiar with Robertson.  Police believe that the motive for the homicide is robbery related.

Update #1: The victim in this case has been identified as De’Lano Plummer (23 year old male from Snellville).  There are no other details available at this time.

(Snellville, Georgia)  Just after 2:20 PM the Gwinnett County Police Department responded to a person lying in the middle of the roadway at Hightower Trail and Donald Road in Snellville.  A passenger said that it appeared as though the male had either been hit by a vehicle or was injured.

When officers arrived to the intersection, they located a deceased male lying in the roadway suffering from at least one gunshot wound.  Officers immediately set up a crime scene around the body and the Homicide Unit responded to the scene.

At this time, the investigation is preliminary.  Detectives are speaking with residents and attempting to locate witnesses.  They are urging anyone with information to contact the police department or crime stoppers.

The identity of the victim is being withheld until next of kin is notified.

If anyone has any information to share in this case, please contact GCPD detectives at 770-513-5300.  To remain anonymous, tipsters should contact Crime Stoppers at 404-577-TIPS (8477) or visit www.stopcrimeATL.com.  Crime Stoppers tipsters can receive a cash reward for information leading to an arrest and indictment in this case.  Case Number:  20-011000 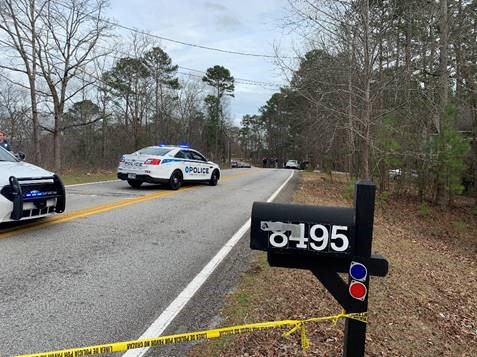