Update #1, 08/13/19: The suspects in this case have been identified as Zion Jacobe Cowart (18, Loganville) and Emmanuel Okyere Boakye (17, Lawrenceville).  Warrants were obtained for both suspects and they have been arrested.  They are being held in the Gwinnett County Detention Center.  Both suspects have been charged with 2 counts of Robbery and 1 count of Armed Robbery.

Gwinnett Police detectives need the public’s help in identifying two suspects connected to at least two cases of robbery by sudden snatching.  The victim was selling a gaming system on the app LetGo.  He scheduled to meet with a prospective buyer that identified by the name “LRN J.”  When the victim arrived at the BP Gas Station located at 2001 Pleasant Hill Road in unincorporated Duluth he was met by two males.  After looking at the game system, one male says he does not have enough money and goes inside the gas station.  The victim begins packing up the game system when the other male grabs it from him and runs away.  The male in the gas station comes out and runs in the opposite direction.

Once the lead detective began reviewing the case, he noticed that the name “LRN J” had appeared before as a suspect.  On July 24 another victim met with a suspect at a deli in unincorporated Norcross to sell an IPhone.  She was also scheduled to meet someone that went by “LRN J” on LetGo.  When she arrived she met with two males.  One male wanted to “test the phone” and put his SIM card in it.  He then says he does not have enough money and asks to borrow some money from the other male that was with him.  Both males then run away while keeping her phone.

Both suspects are described as black males, approximately 5’11” – 6’ tall and 160-170 pounds.  One suspect has an afro style hairdo and both were described as unshaven.

If anyone has any information to share in this case, please contact GCPD detectives at 770-513-5300.  To remain anonymous, tipsters should contact Crime Stoppers at 404-577-TIPS (8477) or visit www.stopcrimeATL.com.  Crime Stoppers tipsters can receive a cash reward for information leading to an arrest and indictment in this case.  Case Number:  19-069887, 19-067644 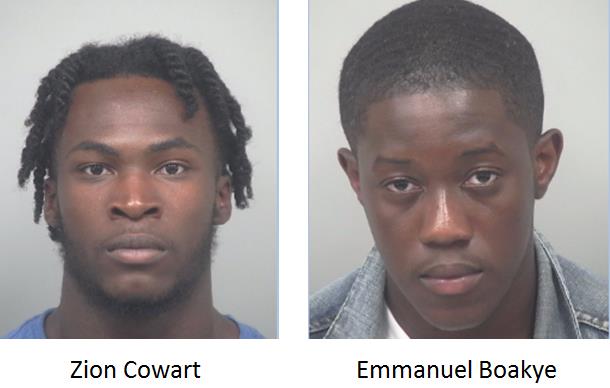