Woman Arrested after Threats Made to GCPD Officers and Local Store

(Lilburn, Georgia)  A Lithonia woman has been arrested after threats were made to GCPD’s South Precinct and a local home improvement store. On Tuesday, February 25, at 3:40pm, the GCPD 911 Center received a phone call from a woman identifying herself as “Jessica” and stated that she was across the street from the South Precinct (2180 Stone Drive, Lilburn) and that “a lot of people are going to die today.”

About 30 minutes later, another phone call was received from the same phone number.  This time, the suspect did not provide their name but stated that they were going to kill everyone at the South Precinct with an AK-47.

On Wednesday, February 26, at around 7:30pm, a call came in to the 911 Center from a woman claiming that she had a bomb at the Lowe’s at 4855 Stone Mountain Highway in unincorporated Lilburn. (Lowe’s is across the street from the South Precinct.)  The caller stated that everyone was going to die.  The store was searched, and no threats were found.

On Thursday, February 27, at around 9am, a woman called the 911 Center claiming that there was a bomb inside the same Lowe’s as the previous day’s call.  Again, no credible threats were found.

The lead detective assigned to this case identified a possible name and phone number belonging to a Lithonia woman.  Detectives visited her home and arrested Jheri Leil Polite (age 35).  She has been charged with Terroristic Threats and Transmitting a False Public Alarm.  Jheri is currently incarcerated at the Gwinnett County Jail. 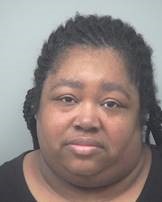