Update #1, 09/19/2019, 3:30PM: At approximately 1:15pm, Jamal Alexander (age 26) turned himself in to officers at the Central Precinct.  He was transported to the Gwinnett County Jail and booked in for his two outstanding warrants for Aggravated Assault and Simple Battery.

Early this morning, uniform patrol officers from the West Precinct responded to a domestic dispute on Preston Lake Drive in unincorporated Norcross. The female victim called to report that her boyfriend pointed a gun at her just after having a physical altercation with him. The boyfriend, 26-year old Jamal Alexander, also lives at the residence along with their infant son.

When officers arrived, they met with the victim outside of the apartment. Officers learned that the suspect pointed a handgun at the victim inside the apartment, after he attempted to choke her with a pillow. The victim was able to flee the apartment and call 911 for help. Multiple attempts were made by officers on scene to make contact with the suspect, which included a loud microphone, but officers did not receive a response from him.

The Gwinnett County Police SWAT Team was activated and negotiators were called to the scene. Negotiators attempted to make contact with the suspect, but he did not respond. Arrest warrants were issued for Aggravated Assault and Simple Battery. A search warrant was obtained, and a search of the apartment was conducted. During the search, the child was located and returned to his mother without sustaining any injuries.

Upon completion of the search, the suspect was not located inside the apartment. It is believed that the suspect fled the scene just prior to police arrival.

If anyone has any information on Alexander’s whereabouts, please contact GCPD detectives at 770-513-5300.  To remain anonymous, tipsters should contact Crime Stoppers at 404-577-TIPS (8477) or visit www.stopcrimeATL.com.  Crime Stoppers tipsters can receive a cash reward for information leading to an arrest and indictment in this case.  Case Number:  19-086468 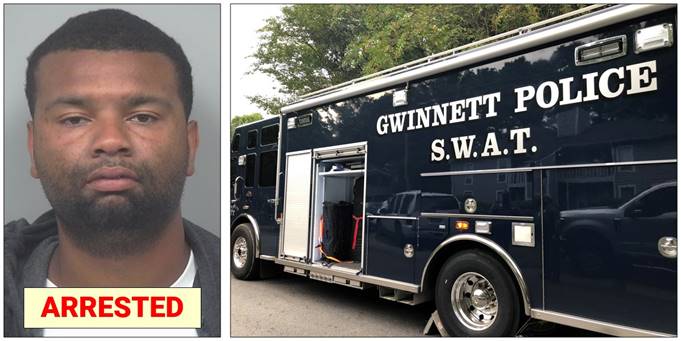