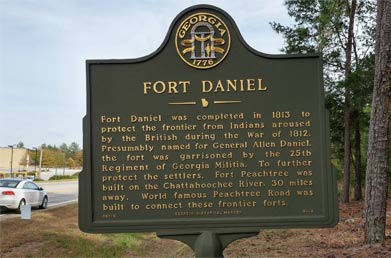 Fort Daniel, the oldest site in Gwinnett County, was a fort in the War of 1812 and was constructed as a replacement of a late 18th to early 19th century frontier fort at the Hog Mountain community. Major General Allen Daniel directed that the old fort at Hog Mountain be replaced in a letter to the old fort’s commander. The replacement fort was constructed in 1813. The site is owned by Gwinnett County and serves as a permanent archaeological research preserve for researchers, historians, and educators.

For more information on the site, visit www.fortdaniel.com.