Update #2 12/7/20: Investigators are still seeking tips in this case.  They believe the motive for this murder is potentially related to a road rage incident.  Those investigators believe that there are witnesses out there or people that have information on the events that took place prior to the shooting.  Detectives want to remind people that they can anonymously provide tips to the police department through Crime Stoppers.  They can also call investigators with relevant information.

Update #1, 07/19/20: The victim as has been identified as 31-year-old Steven Vallejo of Norcross, Ga. The family has been notified.

The Gwinnett County Homicide Unit is still actively working this case. The suspect vehicle has been described as a silver/gray 2010s model Chevrolet Malibu or Impala. During the incident, the suspect vehicle struck the southbound Indian Trail Exit “101” sign. The suspect vehicle will have moderate to extensive front-end damage. The vehicle continued I-85 southbound after the incident. The driver was described as a black male. The motive is still unknown, but road rage could be a factor. Detectives are asking anyone with information to please call Gwinnett County Police at 770-513-5300 or Crime Stoppers at 404-577-8477 or visit www.stopcrimeATL.com.

Original, 07/19/2020: One Hispanic male was shot and killed shortly after 12:30 am this morning. Homicide detectives determined that the two vehicles involved were traveling south on I-85 near the exit for Indian Trail Lilburn Road (Exit 101).

The suspect vehicle, a silver passenger car was driven by a black male and was traveling in the far right lane of I-85 southbound. The victim’s vehicle, another black passenger car was driven by a Hispanic male and was exiting onto Indian Trail Lilburn Road. For reasons currently unknown, the suspect fired one shot from his vehicle into the victim’s vehicle. The victim was struck by that round. He was transported to a local hospital where he succumbed to his injury.

If anyone has any information to share in this case, please contact GCPD detectives at 770-513-5300.  To remain anonymous, tipsters should contact Crime Stoppers at 404-577-TIPS (8477) or visit www.stopcrimeATL.com.  Crime Stoppers tipsters can receive a cash reward for information leading to an arrest and indictment in this case.  Case Number:   20-053218 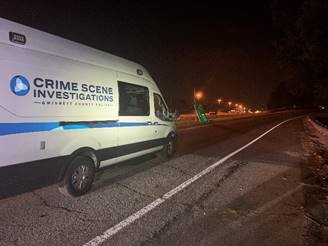