(Snellville, Georgia)  An Atlanta man in on the run after shooting his ex-girlfriend while dropping off diapers at her Snellville home. Officers assigned to the South Precinct were dispatched to a “person shot” call on Laurel Bend Court in unincorporated Snellville at around 3:30pm on Tuesday, March 24.  When officers arrived, they found a woman suffering from multiple gunshot wounds.  She was transported to a local hospital for treatment.

A family member said that the woman’s ex-boyfriend was supposed to be dropping off diapers at the home when he shot his 22-year old ex-girlfriend in the driveway of the home.  The couple’s 1-year old child was outside with them.  After shooting the woman, the suspect then fired multiple rounds at the home.  Family members inside the house were unharmed.

The motivation for the incident is still under investigation.

The suspect was identified as Venezia O. Cole (age 26, Atlanta).  He was seen fleeing the area in a black 2009 Infiniti G37 with temporary tag number P0945250.  Venezia has been charged with:

If anyone knows of Cole’s whereabouts, please contact GCPD detectives at 770-513-5300.  To remain anonymous, tipsters should contact Crime Stoppers at 404-577-TIPS (8477) or visit www.stopcrimeATL.com.  Crime Stoppers tipsters can receive a cash reward for information leading to an arrest and indictment in this case.  Case Number:  20-025895 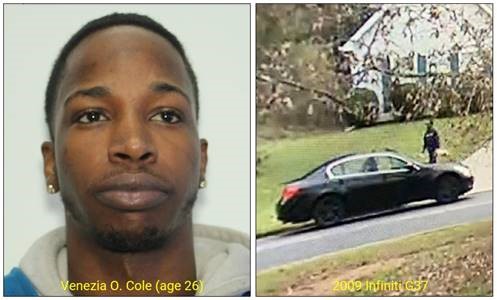