(Atlanta, Georgia)  An Atlanta man shot and wounded a suspect who was trying to break into his home late last night.

Shortly before 9pm on Wednesday, March 18, officers assigned to the West Precinct were dispatched to a “person shot” call on Peachtree Street in unincorporated Atlanta (cross streets are Third Street and Second Street).  The caller reported that a man was attempting to break into his home and he shot him.

The victim told the responding officers that he heard loud banging from the back of his home.  He said that he grabbed his gun and ran to the back door.  He shot at the door a few times and then heard a person screaming.  When he opened the door, he saw the suspect, Ronald Reuben Hayes (age 38, Doraville) laying on the pavement with a gunshot wound to the leg.  He re-secured the door and grabbed his cell phone to call for help.

Ronald Hayes was transported to a local hospital with non-life-threatening injuries. Detectives later charged him with Burglary 1st Degree.  He is still being treated for his injuries.  Upon his discharge, he will be transported to the Gwinnett County Jail to face this charge.

The resident will not face any charges. 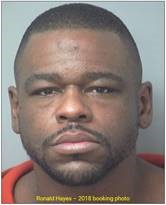