(Lawrenceville, Georgia) Gwinnett Police need the public’s help in identifying a suspect in two theft cases.  The suspect broke into lockers at two separate gyms on June 18.  One gym is LA Fitness located at 1860 Duluth Highway and the other gym is Gold’s Gym located at 860 Duluth Highway; both are in unincorporated Lawrenceville.  He checked in to both gyms using a false name of “Shawn Pitt” and provided what turned out to be a false phone number.  There were no signs of forced entry into the lockers and the lockers were secured with a combination lock.  The suspect was able to defeat the locks and illegally enter the lockers.  He then proceeds to purchase thousands of dollars’ worth of gift cards using the stolen credit cards.  The gift cards were later used in North Carolina and it is believed the suspect may live there or have ties to there.

The suspect is described as a black male wearing a black Nike hoodie and black shorts.

If anyone has any information to share in this case, please contact GCPD detectives at 770-513-5300.  To remain anonymous, tipsters should contact Crime Stoppers at 404-577-TIPS (8477) or visit www.stopcrimeATL.com.  Crime Stoppers tipsters can receive a cash reward for information leading to an arrest and indictment in this case.  Case Number:  19-055523 & 19-055630 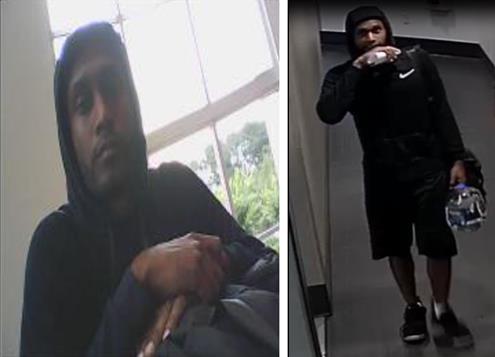