About Your Commissioners Menu


Nicole Love Hendrickson was elected chairwoman of the Gwinnett County Board of Commissioners in 2020, making her the first African American to hold this position. Prior to her election, she was the founding director the Gwinnett County Community Outreach program engaging diverse constituents in county government. After joining the County in 2015, she launched several community-based initiatives, including the Gwinnett 101 Citizens Academy and the Gwinnett Youth Commission. Before her tenure with the County, Nicole served as the associate director of the Gwinnett Coalition for Health and Human Services for eight years.

She has served on the boards of the United Way Gwinnett Community Board, the Georgia Hispanic Chamber of Commerce, and the Aurora Theatre. She also served on the Children's Healthcare Community Board from 2013 to 2020 and chaired the board of the Gwinnett Young Professionals from 2017 to 2019. Nicole is a member of the Rotary Club of Gwinnett County, having held the positions of treasurer and public image chair.

Nicole was the recipient of the Gwinnett Chamber of Commerce Public Service Award in 2017, and Georgia Trend named her one of the state's Top 40 Under 40 in 2018. In the following year, she received the Trailblazer Award from the 100 Black Men of Metro Atlanta.


Kirkland Carden, a former Duluth City Council member, was first elected to the District 1 seat of the Gwinnett County Board of Commissioners in 2020. District 1 includes the cities of Duluth, Suwanee, Sugar Hill, and portions of Norcross. At age 29, he was elected to the Duluth City Council, becoming the first millennial and the first African-American council member in the city.

An Ohio native, Kirkland's family relocated to Duluth in 2004. In 2007, Kirkland graduated from Duluth High School. He earned a Bachelor of Arts in political science from Georgia State University.  Carden was elected to the Duluth City Council in 2017. He also served on the Duluth Urban Redevelopment Authority.

In his professional capacity, he has assisted state and local governments in developing, maintaining, and implementing transportation plans. Additional responsibilities have included budget oversight and facilitating compliance with local land use and zoning ordinances.

For the past decade, he has volunteered as a member of the Duluth Zoning Board of Appeals, Duluth Citizens Budget Advisory Committee, Rainbow Village Millennials Advisory Panel, Gwinnett 101, and the Duluth Fall Festival. The Georgia Municipal Association named him to the 2019 inaugural cohort of the 20 Under 40 Focus Group.

Ben Ku was first elected to the Gwinnett County Board of Commissioners in 2018. District 2 includes Peachtree Corners, Berkeley Lake, Norcross, Tucker, and Lilburn.

A Georgia native, Ben is the grandson of Chinese immigrants who moved to Atlanta to help engineer the original MARTA heavy rail system. Ben has more than 20 years of entrepreneurial and software development experience.

Ben became an ACCG Certified County Commissioner in 2019 by successfully completing core requirements of the ACCG Lifelong Learning Academy operated in conjunction with the Carl Vinson Institute of Government at the University of Georgia. The academy core certification includes eight courses and a two-day Leadership Institute for a total of 66 hours of required courses.

He graduated from the Georgia Institute of Technology with highest honors and is active in the Mentor Jackets program offering guidance to Georgia Tech students. Ben has served as president of his homeowners' association where he helped to re-engage the neighborhood, improve its website and communications, and build cash reserves.

Jasper is the principal/consultant for Watty Consulting, LLC, and senior account executive for the Group Purchasing Organization, Minnesota Multistate Contracting Alliance for Pharmacy Infuse. He served 25 years as an Army pharmacist, five years as chief of the Bureau for Statewide Pharmaceutical Services for the Florida Department of Health and two years with the Atlanta Veterans Administration Medical Center's pharmacy.

A nuclear pharmacist, Jasper received a bachelor's degree in pharmacy from Florida A&M University and a Master of Health Services Administration from Central Michigan University. He completed an Army Fellowship in Medication – Use Safety and is the first African American in the armed forces and the state of Florida to achieve board certification with the American Society of Health-Systems Pharmacist Nuclear Pharmacy Residency Program. While in the service, he assisted in the placement of wounded personnel from the September 11 attacks on the Pentagon, and helped lead pharmaceutical support for civilians in the aftermath of Hurricane Katrina and resupply operations immediately after Hurricane Andrew.

Jasper received the Legion of Merit, the highest peacetime military award, along with the Award of Excellence in Allied Health Care, the Order of Military Medical Merit, and many other military decorations, and honors. Jasper moved to Gwinnett County in 2006 and lives in Grayson. He is a graduate of the Gwinnett 101 Citizen Academy, served as president of the Northforke Plantation Homeowners Association, and is a member of several boards and scientific associations.


Marlene M. Fosque was first elected to the Gwinnett County Board of Commissioners District 4 seat in November 2018. District 4 covers Lawrenceville, Buford, and Rest Haven as well as parts of Braselton and Sugar Hill. She was elected by the board to serve as vice chair for 2020.

Marlene serves as vice chair on the National Association of Counties' Transit/Rail subcommittee of the Transportation steering committee, the Large Urban Counties Caucus steering committee and the International Economic Development Task Force. She also sits on the board of directors as 2020 vice chair for the Gwinnett Convention and Visitor Bureau Inc. Board of Directors overseeing the Infinite Energy Center and Explore Gwinnett, the county tourism board.

She is chief executive officer of Coalesce Consulting, an administrative and consulting company specializing in office, events, meeting, and political strategic planning. Marlene retired from Aetna Inc. in 2017 after 20 years in the health insurance industry.

Marlene graduated from the Georgia Academy for Economic Development 2019 Region 3 Multi-Day Training Program. She also became an ACCG Certified County Commissioner from the ACCG Lifelong Learning Academy operated with the Carl Vinson Institute for Government at the University of Georgia.

Marlene holds a Bachelor of Science in Business Management from Shorter University and a Master of Public Administration with Pi Alpha Alpha from Regent University. She earned an event and meeting planning certificate from Clayton State University. She previously was an elections poll manager and completed Community Emergency Response Team training in 2015.

She serves as volunteer food pantry interviewer and food sorter at Lawrenceville Co-op. She received a Social Action Award from the Rho Kappa Lambda Chapter of Alpha Phi Alpha Fraternity Inc. in 2019 and a Trailblazer Award in 2020 from The Family, a business professional networking group that mentors entrepreneurs and small business for Gwinnett County. Marlene moved to Georgia from North Carolina in 2002 and settled in Lawrenceville in 2003. She has a son who is currently serving in the Air Force. 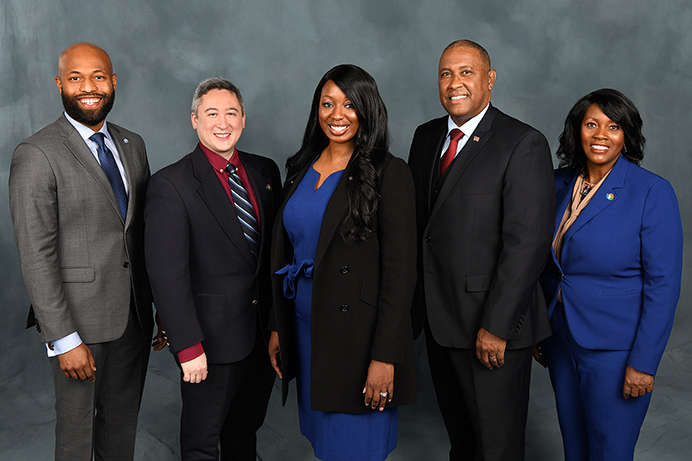