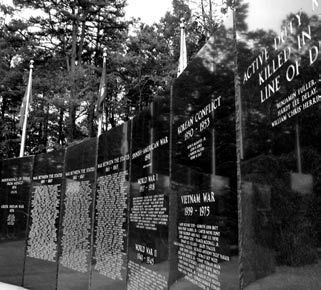 Located on the grounds of the Gwinnett Justice and Administration Center in Lawrenceville, Gwinnett's Fallen Heroes Memorial pays tribute to all Gwinnett residents who died in the line of duty in military or public safety service.

From native Americans "who were the first to love this land," to the most recent casualties, the memorial honors about 700 individuals, organized by categories of service. Their names, in random order and without rank, are carved on 13 black granite markers, which are nine feet tall and weigh almost four tons each. A central pedestal features a Gwinnett firefighter's bronze sculpture of an eagle carrying a rose.

Buford residents Ron and Carolyn Buice, who lost three dear friends in Vietnam, conceived the memorial and formed a non-profit organization to build it. Ten years later, in 2003, it was built with funds from private donations and Gwinnett County government. The continuing purchase and installation of memorial bricks helps defray ongoing maintenance.