(Dacula, Georgia)  On November 29th, 2019, a supervisor with the Gwinnett County Police Department was able to solve multiple burglaries while on his way home from work after noticing a suspicious vehicle.

Sgt. Bell was driving home from work when he noticed a pickup truck pull out of a subdivision that was still under construction (Melton Common Drive in Dacula) just after 5:00 A.M.  When Sgt. Bell saw the truck, he noticed that it had no license plate and that there were two large pillars protruding out of the back of the bed.  Sgt. Bell pulled the vehicle over and quickly discovered that the two occupants of the vehicle, Kyle Fuller (37 years of age, Loganville) and Karey Byrd (41 years of age, Loganville), had two different stories on where they had been that morning.

Both of the occupants of the vehicle were arrested and initially charged with Loitering and Prowling and Burglary 1st Drgree.  The case was handed over to detectives, who searched the vehicle and discovered that Fuller and Byrd had stolen multiple items from the property that morning.  As detectives continued to investigate other items located in the truck, they realized that Fuller and Byrd were in possession of items taken from two other burglaries in Gwinnett County.

Those items were also taken from construction sites and involved building materials and tools.  Those locations were off Sun Lake Drive and Wheeler Road in unincorporated Auburn.

Following the execution of the search warrant in their truck, the lead detective charged them with an additional 3 counts of Burglary 2nd Degree and one count of Burglary 1st Degree.

This arrest is an excellent example of proactive police work.  The police department hopes that the general public will also use this case as a reminder to call the police department if they see suspicious activities around one of the many construction sites in Gwinnett County. 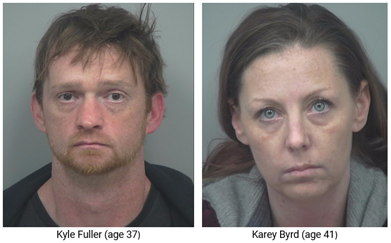