(Buford, Georgia)  The Accident Investigation Unit has taken over a pedestrian accident after recently learning that the pedestrian had died. On Sunday, October 27, at around 7:30 AM, officers assigned to the North Precinct were dispatched to a pedestrian injury accident and hit and run at the Wal-Mart at 3250 Sardis Church Road in unincorporated Buford.

According to the preliminary investigation, a man named Geoffrey Frankovich (age 65, Lawrenceville) was in the crosswalk in front of the store when he was struck by a silver Nissan Versa driven by Mario De Paz Hurtarte (age 20, Buford).  Mario fled the scene and was involved in another hit and run at the intersection of Hamilton Mill Road and Sardis Church Road.

Geoffrey was transported to a local hospital and eventually passed away on November 5.  Mario was arrested at the scene and charged with Reckless Driving, Hit and Run, No License Plate, Improper Class of License, and Failure to Obey Traffic Control Device. Additional charges could be forthcoming. 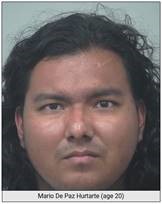