Update #1: The police department was notified by the Gwinnett Medical Examiner’s Office that one person, Norman Daugherty of Dacula, died from the injuries that he received in this accident.  The Accident Investigation Unit located a ladder that they believe was involved in this incident.  They are releasing photos of the ladder in hopes that someone can identify who it belongs to or how it ended up on the interstate.  People with information are urged to contact the police department or Crime Stoppers.

(Lawrenceville, Georgia)  The Gwinnett County Police Department is investigating an accident that involved six vehicles and shut down the interstate for over an hour on March 25th.  The accident happened just after 3:00 PM on I-85 northbound near Beaver Ruin Road.

The accident was started after a vehicle struck a ladder that was in the roadway.  That vehicle lost control and swerved in front of other vehicles.  When other vehicles tried to stop for the original car, they were rear ended by vehicles that were traveling behind them.

Multiple people were transported to the hospital, one with serious injuries.  The Accident Investigation Unit for the police department responded to the scene and is investigating the incident.

If anyone has any information to share in this case, please contact GCPD detectives at 770-513-5300.  To remain anonymous, tipsters should contact Crime Stoppers at 404-577-TIPS (8477) or visit www.stopcrimeATL.com.  Crime Stoppers tipsters can receive a cash reward for information leading to an arrest and indictment in this case.  Case Number:  20-026132 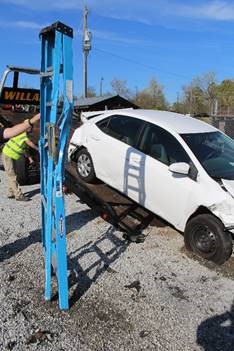